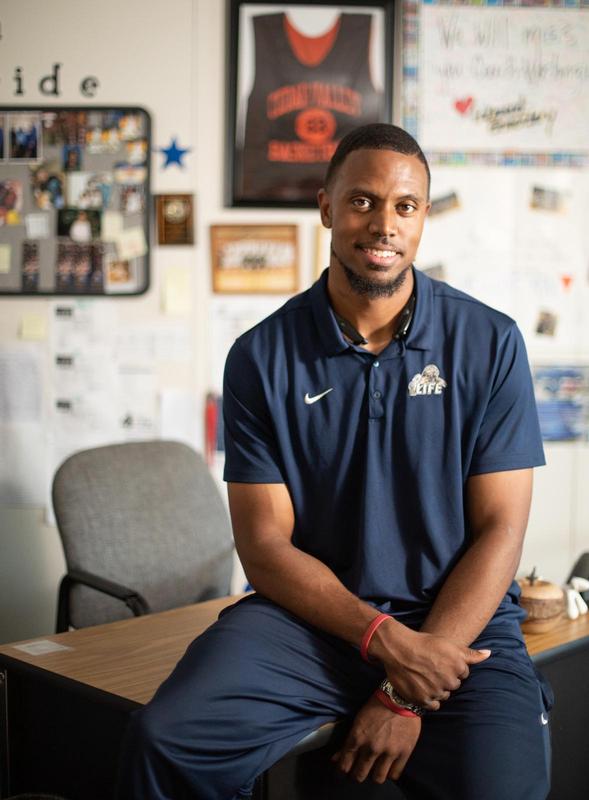 “It’s all about communication and college readiness and helping kids be organized,” says Devon Washington, the educator who leads the program at LSOC. “Our goal is to close the achievement gap and improve their academics so they can go to college.”

“Most of our kids are first-generation college students,” said Washington, a former Life School student himself who returned to teach and coach in the community where he grew up. “We want all of our students to take these classes. It’s a lot of writing, collaboration, and reading. The students have to set and meet weekly goals. We’re instilling in them that life is about short-term goals. If you accomplish them consistently you’ll be pretty successful in life.”

Devon says it’s a blessing he took the position. “I had a choice between AV Tech and AVID,” he remembers. “Thankfully, I took AVID.”

“Kids need someone from the area who overcame some of the same obstacles in life they are facing,” Devon said. “I went to college after high school but I didn’t take it seriously the first time around. I know where they have been.”

Devon graduated from high school and went to Cedar Valley Community College to play basketball. “My doctor told me I had to stop dunking though,” he said. “I said, ‘I can’t stop dunking.’ ”

Unfortunately, the 6-foot-six post player ultimately had to retire from basketball when his knees got the best of him. “I had to stop playing.”

With basketball no longer in the picture, Devon had to devise a new plan. He knew he wanted to be a positive influence in someone’s life, just like his grandparents who raised him were in his own life. It was about this same time that both his grandparents passed away and it became even more important to Devon to fulfill that goal.

Devon took a job at Dallas ISD being a monitor and a coach. “Thanks to that job I found out I loved coaching,” he said. “But the guidelines changed and in order to be a coach you also had to be a certified teacher.”

So back to school he went. While earning his teaching degree, Life School Athletic Director Scott Thrush reached out to Devon to see about coming to work at Life School. “And the rest is history,” said Devon, who had attended Life School Oak Cliff for one year of high school himself.

As a working auto technician, Devon is a self-reported car guy who worked as a car technician while finishing up his teaching degree.

Today, he’s part of a car club and is known for putting on a community-wide car event on the LSOC campus.

“Everything I do is for this community. For Oak Cliff,” says Devon who today lives in his grandparents’ house. “I still live in the same neighborhood where I grew up in South Oak Cliff.”

Devon says he is thankful for his community, for his grandparents, his mother Tanya, his father Carlos and his dear friend Marla Waites. “And for my Life School family, of course.”